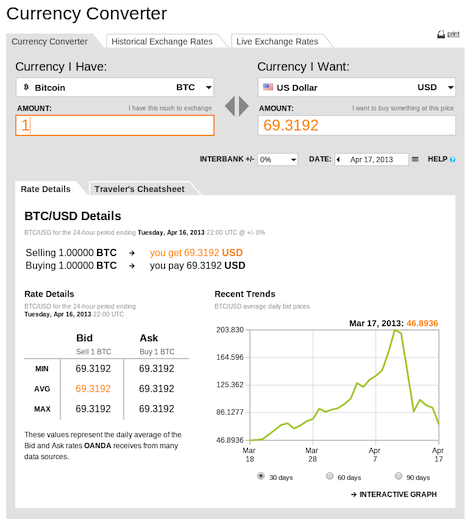 Emerging as a new online currency and a most suitable option for trading, Bitcoin is an anonymous, peer-to-peer, electronic payments system. Created in 200

Emerging as a new online currency and a most suitable option for trading, Bitcoin is an anonymous, peer-to-peer, electronic payments system. Created in 2009, the Bitcoin network was originally intended to offer a means of payment through a peer-to-peer version of electronic cash. The idea was to enable online payments to be sent directly from one party to another thus bypassing financial institutions altogether. Bitcoin  today is a currency trading platform in which digitally signed bitcoins are sold and purchased at a variable price of the currency. Generally 1 BTC is traded between $100 and $260.

Now highly regarded as mainstream due to recent economic woes, even major forex players are getting in on the act. Forex broker OANDA  announced yesterday that it has added bitcoin into its currency converter, via a blog posting by VP of Trading, Courtney Gibson. Gibson states “We recently added Bitcoin to the OANDA Currency Converter. We admire it as an interesting experiment in financial innovation and, because we’re financial innovators too, we share the excitement such disruptive technologies can bring to mature industries and markets.”

Oanda states that Bitcoin appealed to their sense of great customer service. ‘Now, anyone who wants to calculate the conversion of currencies (or gold and silver) into Bitcoin can use OANDA’s popular converter as their tool of choice’ So thats the good news. The blog posting was quick to point out that “Despite the increased awareness around the cyber currency, OANDA has no plans at this time to introduce Bitcoin as a tradeable currency to OANDA’s fxTrade platform, or to accept Bitcoin as a method for funding fxTrade accounts. By adding Bitcoin to our Currency Converter, we are acknowledging – in a very real way – the wide-ranging interest Bitcoin has generated as a virtual payment system.”

Thus far, with the exception of of IG’s bitcoin binary product launched last week, major forex brokers have yet to offer major bitcoin offerings due perhaps to uncertainty or monitoring for stability which will only come when trade volume (on the USD/other fiat side) increases, and network infrastructure improvements can be addressed.