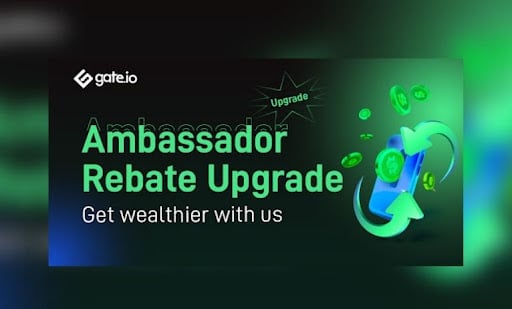 Gate.io introduces Ambassador Program along with a comprehensive upgrade and various new features that give out exciting rewards and rebates to all its users.

Gate.io’s success is positively correlated to the communication between the platform’s members and the brand on a global level. Ever since the Ambassador Program from Gate.io was introduced in mid-August 2021, the platform users have benefited from several rewards offered by the program. Working on this program, Gate has launched an upgrade to its service with which it is able to bring more rewards to its ‘ambassadors.’

What’s new with the Ambassador Program?

Gate.io is a leading crypto exchange that is wholly committed to the contribution of the overall increase in the crypto market as well as the adoption of different cryptocurrencies, welcoming new users into the global blockchain ecosystem and at the same time offering them the benefits of being in a wider market.

The success of the Ambassador Program has allowed Gate to introduce multiple new features along with an intuitive process of admission that allows users to easily join the platform and enjoy the enhanced long-term rewards and rebates.

A lower barrier to entry is the first feature that makes the platform a simpler option for institutions and individuals to be a part of the Ambassador Program. Users who have 500+ followers on different social media channels are eligible to take part in this program and reap the maximum benefits from the rewards.

A third feature includes the secondary rebate that is given when a user refers the Gate.io platform to someone, and they refer others in turn. When the second round of referrals is made, the original users earn a 5% secondary rebate.

The fourth feature includes long-term rebates in which the Ambassador Program’s participants can enjoy a maximum of 12 months’ referral commissions if the users have referred Gate.io ecosystem to others. The moment the period expires, the program’s members will be required to refer additional users in order to continue gaining from the rewards offered by the platform.

Last but not least, the fifth feature is given out as promotional rewards that will observe participants undergo assessments in each quarter and get themselves promoted to a higher reward tier. Once the users get promoted, a maximum reward of 500 USDT will be given to them for participating in the program.

Who are eligible to participate in the Ambassador Program？

Popular influencers with more than 500 followers can participate in the Ambassador Program of Gate.io, where the platform will specifically look at crypto and Blockchain supporters who share similar beliefs in a wider market as well as the technology empowering it. Participants will get to earn lucrative rewards if they promote trading activities on the Gate platform.

Eligible users can be a part of the Ambassador Program via Gate.io official website or the official application after completing the simple steps mentioned below –

Why should I join the Ambassador Program?

Ambassador is an open program for all participants belonging to the Blockchain community, content creators, community group owners, investment consultants, or well-known traders.

Developed in 2013, Gate.io has become the largest and most popular crypto exchange and is considered to be one of the most reliable and safest global exchanges in the world. The platform has more than 10 million users, and it continues to be among the top 10 crypto exchanges in terms of trading volume and liquidity on CoinGecko. Gate.io is a verified crypto exchange in BTI’s (Blockchain Transparency Institute) market surveillance report and currently operates with a 4.5 rating by Forbes. It won the title of the Best Cryptocurrency Exchange in 2021, and it offers a multitude of financial services other than a centralized crypto exchange, Gatechain, venture capital, a decentralized exchange, research institute, wallet, labs, NFT, analytical data services, and many more.