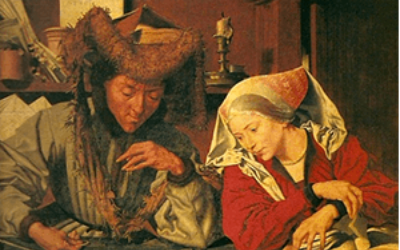 The practice of trading currencies has been around for as long as people have been using money. As was the case with the evolution of money itself, the pro

The practice of trading currencies has been around for as long as people have been using money. As was the case with the evolution of money itself, the process of trading one currency for another emerged as a more practical alternative to transporting and trading other tokens of value such as livestock or textiles.

The first instances of currency trading and exchange occured in ancient times. The earliest known documentary evidence of the existence of foreign exchange merchants can be found in the Talmud, an early foundation text of Judaism and the basis of much of the Old Testament. These people, who were sometimes called “kollybistẻs”, mainly plied their trade in city-stalls, and were often gold-smiths or silver-smiths as well.  In the fourth century, the Byzantium government established a monopoly over the process of currency exchange.

In the fifteenth century, the Medici family opened a string of banks in foreign locations to provide a currency exchange service for textile merchants. This was administered with the help of an account book called the ‘nostro’ (literally meaning ‘ours’) that contained two columns showing amounts amounts of foreign and local currencies. This is the first documentary evidence of a formal system of exchange rates. In the 17th and 18th centuries, capital markets pioneer Amsterdam maintained an active foreign exchange market, setting down a template for future forex markets.

In the US, the first major foreign currency exchange was established by Alexander Brown & Sons in 1850, and in 1880, Banco Espírito e Comercial de Lisboa was established as the first major European bank to engage in currency exchange on a large scale. By the end of 1913, nearly half of the forex transactions in the world were conducted using sterling, but most of the foreign exchange activity took place in Berlin, Paris, and New York. Britain was largely uninvolved in foreign exchange until 1914, with only two brokers operating out of London. However, by 1924 this number had increased to 40, and by 1928 foreign exchange had become an integral part of London’s functioning as an international financial centre.

The use of gold, silver, and other commodities as a form of currency dates back thousands of years, and the earliest banknotes were essentially IOU notes for a certain weight of gold or silver. As banknotes began to replace precious metals as the main form of currency, banknotes came to represent credit money or, if this credit was backed by a government, fiat money. Various standards of valuation, most based on gold and/or silver, were used.  For various reasons, such as a silver shortage in the UK in the 18th and 19th centuries, and the discovery of vast silver deposits in the US, silver was all but abandoned during the 1800s in favour of gold as the basis of currency value in most countries. By the end of the century, virtually all countries had adopted the gold standard , in which currencies were pegged to a certain volume of gold.

Due to the need to fund high levels of expenditure at a time of low tax revenues, the UK suspended the gold standard during the Napoleonic wars and the US government did the same during the Civil War. The gold standard was also abandoned by most countries at the outbreak of the First World War, with the notable exception of the US. By 1927, many countries had returned to the gold standard, although this return was curtailed by the onset of the Great Depression.

The inflexibility of the gold standard, which prevented central banks from injecting money into the economy to fund insolvent banks and government deficits, was blamed by many historians for prolonging the depression of the 1930s. At this point, many people had lost faith in paper money, driving up the demand for physical gold as a store of value, which had a hugely destabilizing effect on the global economy. Bank runs in Austria and Germany led those countries to abandon the gold standard in 1931, and many other countries including Britain followed suit soon after.

Bretton Woods and the Nixon Shock

As World War II was drawing to a close, Allied leaders recognised the need to bring some stability to the global economy in the aftermath of the war. One of the steps towards this end was the meeting of representatives from all 44 Allied states to agree on a new monetary exchange system known as the Bretton Woods Accord. This tied the US dollar value to a specific weight of gold, and pegged all other currencies to within 1% of the agreed exchange rate with the dollar.

As economies diverged, the Bretton Woods system became problematic, and the main problem, as far as the US was concerned, was the emergence of Japan as a major industrial force. This was aided by the massive undervaluation of the yen in comparison to the dollar, which meant that US companies were finding it impossible to compete with cheap Japanese imports. After a succession of minor adjustments failed to address the problem, the Nixon administration ended the US dollar’s convertibility to gold, effectively ending the Bretton Woods system overnight in 1971. This event, which was known as the Nixon Shock, saw the system of semi-fixed exchange rates abandoned in favour of free-floating currency values that reflected the relative supply and demand for the currencies in question. An attempt later that year, known as the Smithsonian Agreement, attempted to stabilise the markets by pegging the dollar to $38/oz and allowing currencies to fluctuate within a wider range than was possible under Bretton Woods. However, this system was also flawed, and by 1973 Japan and the European Economic Community agreed to let their currencies float freely. This was effectively the beginning of the modern forex market as one of the major capital markets alongside stocks and commodities.

With the end of currency controls and the introduction of electronic screen trading in 1973 by Reuters, the modern foreign exchange market was born. This is a global, electronically-linked market with no central exchange that operates from the opening of Asia Pacific markets on Monday morning until the close of North American markets on Friday evening. Up until the late 1990s, this market was the exclusive preserve of institutional traders working for banks and investment funds.

However, the emergence of the internet in the 1990s brought forex trading within the reach of anyone with a computer and an internet connection. Online forex brokers such as Saxo Bank and OANDA were among the first to make this service available to traders working outside of major financial institutions, and while this type of ‘retail’ forex trading only accounts for a very small percentage of the estimated $4 trillion daily forex trading volume, it is a fast-growing sector.

In recent times, this sector has seen huge growth and innovation, with mobile trading via smartphones and tablets making trading services available almost anywhere, and new technologies such as algorithmic trading and social media trading providing intriguing new possibilities for the online trader. Today, the gap between institutional-level forex traders and independent investors is narrower than ever before, and as new disruptive technologies and paradigms emerge, this gap is likely to narrow further – and maybe even disappear entirely – in the years to come.