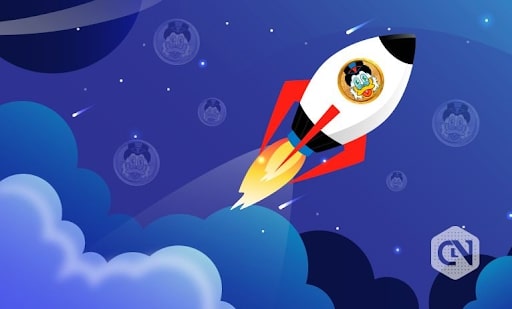 RichQUACK welcomes users to buy and invest with Earthling, its native token, and get carbon credits to invest in initiatives and projects based on sustainability by promoting Earthling.

The latest hyper-deflationary crypto-token, RichQUACK, is supported by a huge community of more than 195,000 followers on Twitter and over 65,000 followers on Telegram. RichQUACK has launched Earthling, its native token, that supports the first-ever incubated project. This platform promotes favorable environmental impact and supports farmers and agriculturalists with reforestation. The Earthling eco-project empowers individuals, businesses, and families to actively participate in the restoration of nature by buying carbon credits and helping in the elimination of carbon emissions.

The carbon credits usage, which incentivizes individuals and companies to emit less carbon dioxide, is a great valuable asset used towards the goal for a greener environment and, most importantly, in the fight against climate change. This Eco-program will help the world take a step towards becoming carbon neutral.

The Katingan Mentaga Project is one of the biggest emission reduction environmental-friendly forest projects that has generated sufficient carbon credits equal to taking 2 million automobiles off the road every year. It is a market of $1 billion carbon credits, and it continues to expand with even greater potential of bringing new opportunities, especially for the farmers, who can typically reduce carbon emissions at much cheaper rates than any large corporation.

Earthling, the Eco-Project’s native token, will be available to users to support this entire project’s funding. Earthling will also be used to reward users who stake with carbon credits. Thanks to Earthling, it will be easier to evaluate carbon emissions on a day-to-day basis and offset carbon footprint simultaneously by purchasing more carbon credit through this platform.

All Earthling holders will become vital members of the Earthling Decentralized Autonomous Organization (DAO) and will have a voice on various projects to fund and support distribution between nonprofits and reforestation programs. The main objective of this project is to become a top platform for the dissemination of eco-education, plant over 10 million trees through reforestation programs, and help businesses and individuals remove 1 Gigatonne of carbon by 2030.

According to a responsible member of RichQUACK, the community is passionate about saving the planet by preventing climate change and reducing carbon emissions. The members are hopeful that the Earthling users will help integrate cryptocurrency enthusiasts around the world to fight against climate change and reduce global warming. The platform is extremely welcoming and constantly tries to include those who wish to bring a change by giving them a chance to join the incubated project and be responsible individuals of this community and the world by extension.

A 100% hyper-deflationary, community-driven token, RichQUACK comes with very high liquidity and offers higher returns to its investors. The token has a strong and active community of more than 195,000 followers on Twitter and 65,000 followers on Telegram. The native token of RichQUACK, QUACK, has powerful utilities like staking, a launchpad, and an eco-project that empower individuals, businesses, and families to take active participation to eliminate carbon emissions.