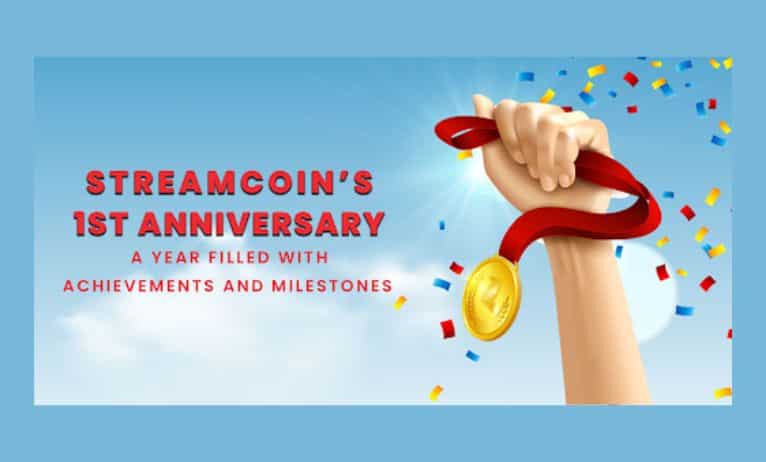 Read our post and know that StreamCoin turns one and steps into the new year by achieving pillars of success through various partnerships and projects.

It was August 1, 2021, when StreamCoin entered the blockchain world. Today, with its first-anniversary celebration, the team shares their achievements on their first trip around the sun and milestones they seek to achieve in the future.

From Baby Steps to Record-Breaking Success

Founded by a team of crypto enthusiasts, who believe in blockchain’s capability to create adequate space for creators, artists, and investors worldwide, StreamCoin was an answer to the expanding video-sharing applications sector that surged in the post-pandemic phase. To capitalize on the rise of video-sharing platforms, the team tapped on the potential of blockchain as the predominant technology to create a fair and open environment for all users in the NFT and live streaming space.

Within a few months, the team accelerated the Research and Development for the StreamCoin ecosystem and included MeiTalk, STRMNFT, and Stream Chain (Mainnet 1.0) in its arsenal after the seed funding. Moreover, it built partnerships to ensure global ecosystem adoption with many blockchains and live streaming platforms. Among the partnerships StreamCoin established, the most valued one was with Real Research, a blockchain-based survey application with over 4 million users across 165 countries, followed by other live streaming platforms for MeiTalk’s multi-streaming feature.

Before the Initial Coin Offering (ICO) concluded its second round, StreamCoin achieved more than it promised in its initial roadmap. Later, StreamCoin launched the GaStream (GSTRM) utility token, which was airdropped to the eligible public sale participants and then listed on multiple exchanges.

Meanwhile, in March, the platform sponsored a platinum booth at the World Live Streamers Conference 2022 (WLSC) in Dubai, UAE, hosted by its partner company TNC Group. StreamCoin presented its ecosystem to 30,000+ investors, industry leaders, and influencers. During the event, StreamCoin announced the launch of MeiTalk’s Alpha version, which was available to all users to try and check its unique features with support for multi-streaming to Youtube, Instagram, and Twitch. Moreover, the STRMNFT preview version was available at its booth for attendants to try the minting feature.

By April, StreamCoin has built partnerships with various blockchain firms, including Metabase Network, WeBlock, Aladdin Pro, and Daoverse Capital, among many others. As the platform approached the listing date, it finalized many listing partnerships, preparing to list STRM on 100+ exchanges. Finally, on April 30, SteamCoin successfully concluded the public sale and achieved its soft cap by raising $11.7 million and a corporate ICO participation of 200 million STRM from TNC Group. During the seed funding and the public sale, it also made many burning rounds for STRM, decreasing the total supply by more than 50% until May.

In May 2022, StreamCoin set a historical record in the industry by being listed on 100+ exchanges simultaneously and launching the STRM Staking Portal. Also, the STRMNFT marketplace was officially launched for registration to let the new users experience the marketplace by enabling them to mint NFTs for free. The listing provided access to STRM for millions worldwide with centralized and decentralized trading platforms, and the portal offered up to 700% returns in GSTRM. Alongside, StreamCoin also developed the Stream Bridge swapping service, making STRM cross-chain compatible with five blockchains.

In July, the first NFT sale on STRMNFT commenced with the Lady Ape Club (LAC) NFTs. 9,000 NFTs were sold out within four hours during the sale, breaking a record in NFT sales despite the current crypto winter.

As StreamCoin turns one and steps into a new year, the team is energized to continue achieving future milestones through developing the ecosystem and implementing new features tailored to its users needs.

The team strives to focus on developing STRMNFT by improving users’ experience and adding new features, opening it for all creators to create, trade, and collect NFTs. Moreover, it will continue the development of MeiTalk in line with the roadmap.

StreamCoin aims to start burning 50% of the STRM tokens accumulated from its service fees every month, starting this August. The platform will also announce every new burning on its official channels. Visit the official website to learn more about StreamCoin’s ecosystem, journey, and roadmap.