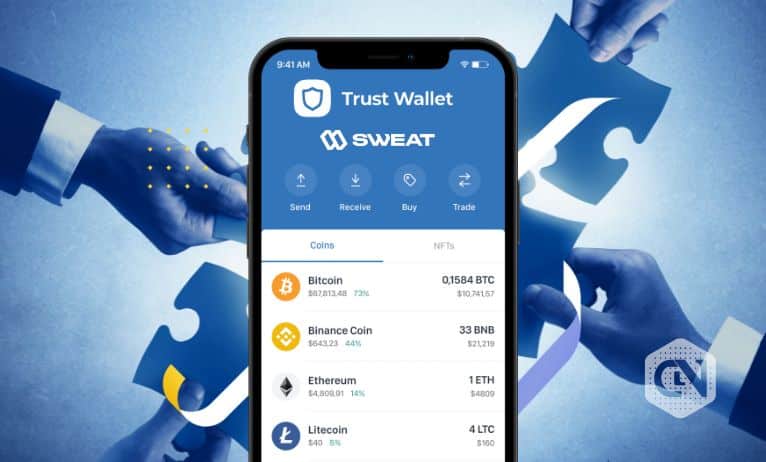 Users can now send and receive SWEAT ERC-20 tokens on Trust Wallet, as the platform has integrated the token. Read more about it in the article.

The news came from the official Sweat Twitter shortly after the launch of its largest ever airdrop. It has only been a couple of days since Sweat Economy’s release on the NEAR network, and it is already breaking records.

You can now send and receive SWEAT (ERC-20) to your #TrustWallet 🎉#walkintocrypto 💧⚡️ pic.twitter.com/4nPXI87ZQu

Known for its unique premise, the “economy of movement,” Sweat entered the market with a record-breaking airdrop. With traces back to 2016, the Sweat Economy made a major name in the market by gaining 120 million worldwide users on its web.

At the same time, the platform distributed its Web3 token, $SWEAT, to more than 13.5 million token holders. The development helped Swear Wallet climb the ranks to become the most downloaded Finance app in 50+ countries.

This successful venture came right after Sweat became the quickest-selling IDO on the DAO Maker ecosystem. The platform has already distributed more than 4.7 billion tokens to users trying to explore the Web3 industry.

Sweat Wallet has been presented as an entry point for users to enter Web3 from Web2. The multi-feature wallet has been designed to help new users with no blockchain technology experience.

Besides this, the Sweat team also talked about two million+ users downloading and activating Sweat Wallet within 72 hours of its launch. Currently, it becomes the one of the most popular cryptocurrency wallets in the market.

Oleg Fomenko, Sweat Economy’s Co-Founder, also talked about the development. According to Oleg, the last week was filled with milestones for the Sweat team. With Web3 becoming more popular, the Sweat Wallet app will become even more popular among new users.

The latest integration with Trust Wallet will also serve this purpose, given its widespread reach and user base.