MakerDAO is a stability platform comprised of a stablecoin, a governance coin, and a decentralized governance model. Stablecoins are a potential solution to the volatility of cryptocurrencies, allowing for wider adoption. In this interview, Rune Christensen, Founder of MakerDAO, explains how this project attempts stabilization, exploring topics including security audits, liquidity, market manipulation, and the …

MakerDAO is a stability platform comprised of a stablecoin, a governance coin, and a decentralized governance model. Stablecoins are a potential solution to the volatility of cryptocurrencies, allowing for wider adoption. In this interview, Rune Christensen, Founder of MakerDAO, explains how this project attempts stabilization, exploring topics including security audits, liquidity, market manipulation, and the importance of a DAO.

Leslie Ankney: Hi Rune, thanks for joining us. MakerDAO has been both applauded and criticized for its complex stablecoin model. How does the MakerDAO ecosystem works to stabilize the Dai?

Rune Christensen: MakerDAO works using collateralized debt positions (CDP) on a decentralized platform. People can take out debt positions using our stablecoin, the Dai (1 Dai = $1). The Dai credit system uses tokens or assets to back up their value.

Together, these CDPs create a marketplace of stability seekers and leverage seekers. Leverage seekers, or borrowers, put collateral, like Ethereum, into the system and generate Dai based on that collateral. The borrower wants to purchase additional ETH, and someone on the other side would be selling their ETH, seeking stability in the form of Dai. From this, one person has stability and the other person has a leverage position through the credit platform.

Leslie Ankney: All of this is done through a smart contract?

Rune Christensen: Yes, smart contracts make Dai accessible as an official front end for stability and leverage seekers. There are many new projects building on top of this, such as EasyCDP.com, creating these easy interfaces.

In general, we see Dai and the CDP credit platform as underlying infrastructures on Ethereum that other projects can build on, similar to the way many projects build on top of Ethereum itself. Any project can use Dai as a safe and stable store of value instead of something volatile.

Rune Christensen: Maker is the first Decentralized Autonomous Organization (DAO), predating even The DAO, and our project has been around before Ethereum even launched. Because of this, we’ve spent a long time thinking of worst-case scenarios and designing a DAO model that works in response.

A governance model is what blockchain is all about. Blockchain was born out of a response to the financial crisis. When Wall Street and banks thought they were “too big to fail” and weren’t held accountable for their decisions, blockchain and decentralized governance emerged in response in the form of Bitcoin. As a community, we want to do things differently.

MakerDAO and the MKR token use a decentralized governance structure to bring stability to our stablecoin, the Dai. We believe money and credit systems should be transparent so no one can sneak in their own agenda. An open governance process prevents corruption. If there’s risky stuff going on, like if a mortgage-backed security is being too lenient with credit ratings, anyone can audit that in real time. MakerDAO has a whole framework for making decisions in these situations.

MakerDAO is an open community where people reach consensus on how to safely govern credit and its stability. Sometimes, there will be insolvency, and our governance model holds its decision makers accountable. Members earn money when things are going well, and when there’s insolvency, MKR is autonomously sold off to recapitalize the Dai, and the MKR holders who made the decisions in the first place lose money as a result.

Unlike the financial crisis, where bankers were bailed out with taxpayer money, members of MakerDAO profit from good decisions, but also are held accountable for bad decisions. This model invites new members when things have been mismanaged so they have an opportunity to take control of the system and purchase shares of MKR. This governance model rewards learning from the mistakes over time. We think this is crucial to having a decentralized, stable system. Open governance helps to prevent the danger of relying too much on one single point of failure.

Leslie Ankney: Looking at other stablecoin models, we see some that are fiat-backed, like TrueUSD and Tether, as well as on-chain collateralized or crypto-collateralized, and then most recently, non-collateralized crypto models based on Seigniorage Shares, like Basis. Why did you select your model? What do you see as limitations with these other models?

Rune Christensen: We consider a multi-collateralized, on-chain model the only truly decentralized stablecoin. Nowadays, what used to be called “IOUs” are also called stablecoins.

I think it makes most sense to look at MakerDAO in contrast to something like Tether or TrueUSD, or Circle. These all ultimately rely on a bank, and that really means that this bank ends up holding leverage over an entire system almost like a centralized platform where whatever you build on top of the stablecoin is also built on top of the bank.

For example, TrueUSD is actively managing who can adopt their stablecoin because they have to conform to the demands of their bank. So on one hand, these stablecoins have real collateral behind them, but in the long run they are vulnerable to the “too big to fail” narrative where banks would be the point of failure.

Leslie Ankney: What about elastic crypto-collateralized models like Carbon, Basis, or Fragments?

Rune Christensen: They are the other extreme from the fiat-based models; Dai is in the middle of these two. All of those are basically Seigniorage Shares successors, which believe you can create money out of nothing. When you don’t have anything real backing your stablecoin, they can hold value for a while, like NuBits, but the only thing backing their value is faith and a number of complex algorithms.

Ultimately these algorithms are there to convince people that they should continue to buy this stablecoin for one dollar. Basis is my favorite Seigniorage Shares stablecoin. The problem with Basis is that it’s kind of the same for all of them; there is this circular relationship where the stablecoin is stable because the backing asset has value, and the backing asset has value because the stablecoin has utility, which means it is stable. That makes perfect sense when the backing asset gets more valuable and the stablecoin is more stable, but when you reverse that process you basically get a scenario where if the stablecoin becomes less stable, people start moving out of it, and the backing asset that is supposed to keep its value stable also suffers as a result. You get this death spiral, like a bank run, where suddenly there’s a loss of faith that makes even more people scared of what’s happening and everyone moves out of the market, causing a huge fall. This has actually happened to NuBits several times and they were able to recover once, and they may not be able to recover this time.

Many other Seigniorage Shares models are planning to do the same thing, claiming that once there’s no longer enough collateral, there will be enough faith in these coins to keep their value. A true stablecoin needs to go beyond that; it should be designed for the worst possibilities and able to survive them. This is the approach we take with Maker. We’re prepared for a massive market-wide meltdown of many different asset classes by diversifying our collateral.

Leslie Ankney: I remember you really focus on black swan events in presentations.

Rune Christensen: Stablecoins have an obligation to look at all the ways a system can fail and really analyze and describe them, and then mitigate them in the best possible way. I think many stablecoin models are completely ignoring this and not thinking about it enough.

Leslie Ankney: What are you doing to test your code to ensure MakerDAO works as planned?

Rune Christensen: We use many external audits. In one case, we found an issue where if we kept using the system for hundreds of years, we’d eventually get rounding errors; we were able to find and catch that thanks to auditing. We haven’t had any major issues, but we’re still super careful and looking for bugs. We invest heavily in formal verification and are developing our own open-source programming language for assisting formal verification so the entire community can learn from this work.

Leslie Ankney: How do you prevent exploitation and market manipulation? For example, on March 18th, very recently, approximately US$4 million was liquidated to repurchase $4 million in Dai. When this auction occurred, the price of Dai spiked from $1.00 to $1.11, which could net someone almost $300K in profit.

Rune Christensen: This is actually a sign the system is working. We are just seeing it on an extreme magnification because we’re running our beta version with a very small ecosystem of participants. In our current beta model, the system buys Dai at a premium as an incentive for people to sell it back, allowing the system to contract its supply. In the short run, if the Dai rises to $1.11, selling it yields an 11% profit as a design incentive. We encourage people to sell their Dai when they see the price go over a dollar, and purchase Dai when they see it go below a dollar, bringing the price up.

Leslie Ankney: Where do you see the mass adoption coming for stablecoins?

Rune Christensen: Both supply chain companies and the unbanked can benefit from blockchain, and especially through stablecoins. Supply chain today is a massive industry based on very inefficient systems ready for disruption. Blockchain brings payment tracking, faster transactions, and lower fees. Stablecoins remove the international currency conversion barrier and lengthy transfer times that make it really hard for cash-strapped small businesses to grow.

Very often, small and mid-sized companies can’t get the kind of loans offered to large companies, and a collateralized credit platform removes this unfair practice by basing loans on collateral, not company size. Solving this imbalance will unlock new efficiency and innovation for healthy economic growth.

Stablecoins can also help the unbanked. For example, we’ve partnered with Bifrost, a charity solution that brings cash directly to crisis zones. Using Dai, Bifrost is able to cut out banks and make a direct transfer through a charity. They purchase Dai in their home country, and then sell it for cash on the ground which they can make immediately available to the people who need it. Not only does this lower fees and decrease transfer times, it also removes the risk of funds getting lost, frozen, or seized by the wrong parties. 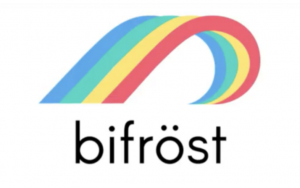 We think these two things, like the business focus of supply chain and then the social focus on bank and charity efforts, are strong pillars to direct growth.

Leslie Ankney: Rune, thank you for your time today. Next time, I’ll be interviewing Kain Warwick, the founder of Havven, for yet another approach to creating a stable cryptocurrency.